The following steps show how to create a scene.

By selecting any of the scenes you created and clicking on the right mouse button you will be presented with the Scene Menu.

When you select the Query option on the menu, the ISY will query every device in the scene. Any new status retrieved is presented in the scene view.

The Rename menu option allows you to rename the selected scene.

The Remove Scene menu option will completely remove the scene from ISY and delete the links in all the scene devices.

Opens a requester with a drop-down of available folders.

Scenes are groups with members comprising of INSTEON devices. Each of which may have certain pertinent and permissible attributes for that specific Scene. For instance, a SwitchLinc may become a Controller for a scene and all the other devices assigned to the scene would respond to it based on its On Level and Ramp rate attributes (if applicable) for that scene. Attributes for all devices are stored in the devices itself. These attributes are invoked in three levels of your lighting network, the ISY, Controller and Local.

The ISY as the controller of the scene relies on a trigger(s) or schedule(s) defined in the program detail tab to invoke these attributes. Meaning, if the conditions set in the program are met and the action defined is to start the scene, the ISY will use the scene attributes at this level to create the lighting scene. The attribute setting for this scene is found at the scene folder level.

Local control or noted as “Applied Locally” is when a device within a scene is locally controlling its own load. This is true for SwitchLinc and KeypadLinc’s load key.

When the Scene folder is selected the ”Apply Changes to All Devices” checkbox is available. See Figure 38. This feature will allow the user to copy the attributes (On level and ramp rate) of the last device that was set to all devices within the scene. These attributes are stored in each device and are invoked only by the ISY. 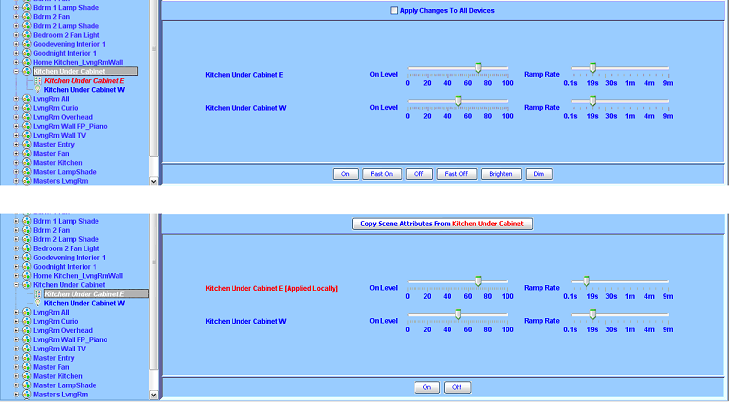 A scene can help create the right ambiance for a certain event by a simple click. For example in Figure 39 we have created a movie scene. The lights in the Living Room were set to be turned on at the desired light intensity while viewing a movie. To populate a scene, simply drag and drop INSTEON devices into the scene. 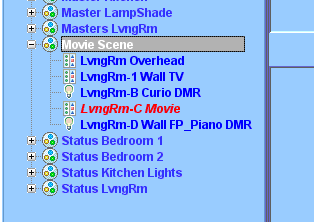 In Figure 41 – Living Room-Movie Scene you will find the detail screen of the devices assigned to the scene. You can control or set all the devices of the scene using this screen. Every time the scene is triggered the controller will use these settings to set all the responders. 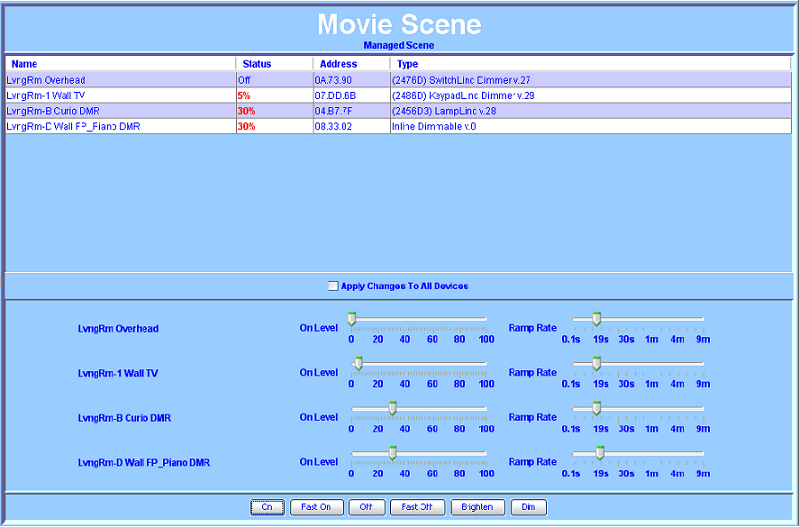